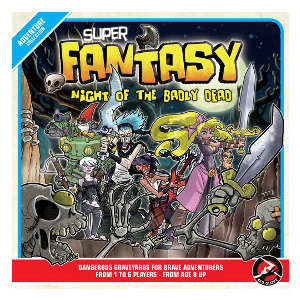 Super Fantasy uses a simple yet unique dice-based system. Players have a pool of six dice to roll that they manage according to the action they want to perform (such as movement, attack, etc.) and its effectiveness. Each face of the dice shows either a 1, 2 or the Special Power symbol and the sum of the results shown represents the effectiveness of the action performed by the heroes. Every time the Special Power symbol occurs, the hero can choose to charge one of his abilities; once fully charged, the hero can unleash its power against the enemies!

Are you ready for the biggest adventure of all times?