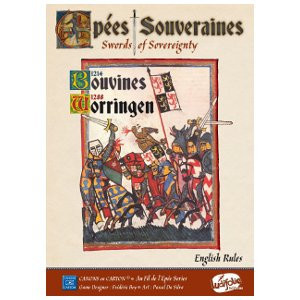 Swords of Sovereignty is the 12th module in the series Au Fil de l’Epée (By The Edge of the Sword). It covers two of the most important battles of the XIII Century; Bouvines (1214) and Worringen (1288). The two battles are very well balanced with opposite armies of same quality and strength. Knights and foot soldiers both have important roles to play to gain victory. Bouvines and Worringen also played a crucial role in the development of the formation of French as well as Belgian national identity.

The two armies both consisted of less than 10,000 combatants; about 9,000 led by emperor Otto and a little less than 7,000 by king of France Phillip. The battle began on the left wing of Otto’s army where Ferrand, the Count of Flanders, engaged Brother Guerin and Eudes, the Duke of Burgundy. On the other end of the line the fight was more equal. Robert of Dreux, with the Royal Army, was engaged with William “Long-sword” and Renaud Dammartin who were threatening the Bouvines bridge. But it was in the center where the battle would be decided. Commanding a large force of infantry, Otto attempted to capture Phillip II by seeking to attack the person of the king. The French knights were just as determined in attacking Otto who was unhorsed by Enguerrand of Coucy. Phillip, however, was also thrown to the ground. The men-at-arms and the knights of the two sides pressed their attacks and rescued both sovereigns. At the side of the French king the Oriflamme was unfurled, inspiring his men to greater courage. At last, Phillip’s knights were able to gain the upper hand; a new charge, led by Guillaume des Barres and Girard de la Truie almost reached Otto who ordered a withdrawal, breaking the morale and leading to the rout of his army. Bouvines was definitely a decisive victory for the King of France: 170 enemy knights were slain, 128 others were captured and ransomed and the loss of common soldiers was calculated to be over a thousand. The victory of Bouvines gave rise to a real feeling of nationalism in the old Capetian Kingdom.

A coalition was organized around Siegfried II, Archbishop of Cologne, who was opposed to any increase in strength of the Duke of Brabant. Siegfried obtained the support of Henri VI of Luxemburg, and of his brother Waleran I, Count of Ligny, and of Adolf, Count of Nassau, for the purpose of defending Renaud’s claims. Opposing them, John of Brabant had put together a coalition including the Counts of Marck of Loon, of Tecklemburg and of Waldeck, all of whom wished to be relieved of their subservience to the Archbishop of Cologne, and also some French knights such as Hugh and Guy of Saint Pol. The two armies, reinforced by local militias consisting of peasants and sergeants leading them, were about equal in strength: 4,800 with the Duke of Brabant, of whom 2,300 were knights, and 4,200 for the Archbishop including 2,800 knights. The burghers of Cologne, for their part, favored the side of John of Brabant. The two forces met 5 June 1288: on the left flank, the battle began badly for the Duke of Brabant who restored the situation with the help of his knights who charged in close order while maintaining good coordination with their infantry. The battle of Worringen ended in a triumph for the adherents of Brabant who, following the death of Luxemburg and of his brother were able to capture the Archbishop Siegfried and the Count Renaud de Gueldre. The army of the Archbishop mourned more than 1,000 dead while losses on the Duke of Brabant’s side were less than 50. The victory of John of Brabant was far reaching allowing the emergence of a powerful Duchy of Brabant.