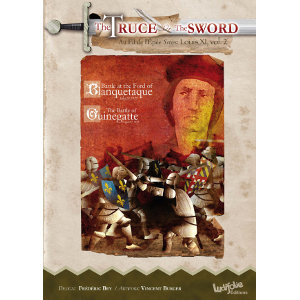 Louis XI : The Truce or the Sword

The Truce or the Sword is the 13th volume in Au Fil de l'Epée (By the Edge of the Sword) series and the second "Louis XI" volume.
It covers two battles of Louis XI, King of France : Blanquetaque (1475) et Guinegatte (1479).

Blanquetaque (1475): After his defeat in the war with the league of “Public Weal”, Louis XI succeeded in dividing his enemies and regaining the lands he lost in that war. In 1472, the premature death of his brother Charles de France, and the failure of the Burgundians at the siege of Beauvais were the first events to turn in his favour. However, one mortal danger still threatened the lily throne. The Burgundians had concluded an alliance with the English after Charles the Bold’s marriage in 1468 to Marguerite of York (a sister of Edward IV, the English king). Louis XI gained some respite by trying to prolong the civil war in England between the Yorkists and the Lancastrians, but after the death of Henry VI of Lancaster in 1471, the Yorkists won. In the early part of 1475, Edward IV debarks at Calais with the biggest army ever brought by a king of England to the continent. It took all the cunning of Louis XI, and blunders by the Duke of Burgundy, to dissuade Edward IV from restarting the 100 Years War. Disappointed by the unkept promises of Charles the Bold, Edward signed a seven year truce at Picquigny with Louis XI on August 31, 1475. Louis XI had to dig deep in his pockets and promised a pension of 50,000 gold ecus yearly to the English crown, an important sum for the always- short-of-money King of England, but relatively modest for the King of France. Even if it was still not a peace treaty –peace was never signed with the Kings of England, who finally removed the lily flower from their coat of arms in 1802 - the Picquigny truce definitively ended the Hundred Years war...

Guinegatte (1479): Charles the Bold, the Duke of Burgundy, was killed at the battle of Nancy on January 5th 1477. Immediately, Louis XI invaded the Burgundian lands. The Dukedom, then known as the County of Burgundy – nowadays Franche-Comté – was occupied by the King. To the north the Burgundian Netherlands were taken by storm. Picardy, then Artois and county of Boulogne fell to Louis XI, not without a fight, because the population was very hostile to the French. In August 1477, Mary of Burgundy, sole child of Charles the Bold married Maximillian of Habsburg, son of the Holy Roman Emperor Frederick III. It now fell to Maximillian to defend the heritage of the dukes of Burgundy. On July 29th 1479, he laid siege to the town of Thérouanne, occupied by a major French garrison that regularly raided the Flanders region to terrible effect. Louis XI was seriously ill at this time. He delegated the command of his armies in the north to Philippe de Crèvecoeur, Lord of Esquerdes, a Burgundian renegade who deserted to the King in 1477..